The Spanish plant of the French multinational group TBI, which specializes in the manufacture of technical precision parts through mono-material, bi-material and tri material injection molding, has installed two MiR200™ for the internal transport of materials and has thus managed not only to improve the productivity of production operators but also to increase the number of injection machines in the space saved. The two robots travel approximately 100 km per month and have enabled the company to assign two warehouse technicians to higher-value tasks in the distribution area.

TB Spain Injection (TBSI) is a company specialized in the transformation of plastic materials by injection for the automotive sector and is part of the French group TBI. The products manufactured in its plant located in Vigo in Northern Spain form the components for car seats, electrical wiring, and engine compartments that are built into into vehicles produced by PSA Group, Volkswagen, Renault-Nissan and Ford.

With a workforce between 40 and 50 workers, the plant has 15 plastic injection, welding and parts assembly machines together with a warehouse for raw materials and finished products. The production lines operate 5 days a week in three shifts per day. For Manuel Canitrot, the plant director, the implementation of technologies that allow automation and the digitalization, control and management of processes, encompassed in the dynamics of "FACTORY 4.0", has been an important factor in helping them to increase the company's competitiveness and improve the quality and reliability of their products.

"We needed to streamline the distribution of the machinery and the flow of materials in the plant, in order to recover space useful for production, optimize the actual production surface area, and increase output with the implementation of more machines in the same factory floor space that we have at present," says Manuel.

The supply of packaging materials used to be carried out manually in a process in which two warehouse workers were responsible for transporting pallets with boxes using a forklift truck through the production area, and depositing them next to the machines so that the operator could access them. They often delivered more materials than was needed to ensure that the operator always had what he or she required, causing pallets to accumulate around the machines, taking up too much floor space and posing a risk of the operator tripping over them by accident.

"We were looking to automate this intra-logistics process between the production area and the warehouse," he adds, "and so we decided to implement two robots MiR200™, equipped with automatic shelves to pick up packaging materials from the warehouse, take them to the production line and return back with the finished product already packaged".

03 Automating the internal transport of materials

The MiR200s were therefore integrated into the process of transporting packaging materials to the production lines from the warehouse so that the task is fully automated. Now, when the worker needs a delivery of materials, he calls up the robot with a PDA device using a QR code that contains the information the robot needs to find where the materials are located. The robot goes to the correct warehouse shelf, they are automatically loaded onto the robot's shelf unit, and the robot starts its journey to the production point where it has to deliver them.

In this way, the workers on the line receive the exact amount of materials they need when they need them, and TBSI has also eliminated the presence of pallets on the floor around the machine operators, with all the improvements in terms of space, work safety and ergonomics that this entails.

"With the floor space we have recovered by eliminating the use of pallets, we have been able to increase the number of production machines from the 9 we had to the current 15," says Manuel Canitrot.

The MiR200 robots work 24 hours a day during the three shifts that TBSI operates daily at the plant and they have covered about 500 kilometers since they were first integrated, so the company estimates that they travel an average of 100 kilometers a month. This translates into savings of up to 16 hours a day in terms of human labor, equivalent to the work of two operators who have now been assigned to more valuable tasks in the warehouse.

"This is very important as it allows us to optimize our human resources and allocate our staff’s working time to much more productive tasks," says Lucia Regueira, the plant's logistics technician. "What's more, we have also created a much safer environment for workers thanks to the mobile robots, as the movement of forklifts through the plant's corridors meant a greater risk of accidents in the workplace. The MiR200s, with their high safety performance and their ability to detect obstacles in their way, be it a human worker or an object, and automatically stop or avoid them, have reduced the risk of such accidents to a minimum’’.

When the operators started working with the robots in the plant, they were initially received with moderate enthusiasm on their part, given that in any other organization, change can sometimes take time to be accepted. However, now the plant employees have seen how they work and the benefits in terms of efficiency and productivity they offer, they are much more open to handling and interacting with the MIR robots. And in some cases, it is actually the employees themselves who suggest ideas and solutions for improvement as they now understand how AMRs work and what can be done with them.

More robots in the future

What interested TBSI most about the MiR200s at the beginning was their size and load carrying capacity, as their intention was to implement them as an alternative to forklifts and pallets on the factory floor and free up more space in the plant for production. In addition, they have to pass through two doors on their way between production and the warehouse and at the same time be able to transport considerable weight at times, between the upper shelf module and multiple packages of finished products.

"Of course, other key factors that helped us make the decision to opt for MiR robots are their ease of configuration and use and their flexibility, features that have allowed us to adapt them to meet our automation needs, as well as the support and assistance offered by MiR," says Lucia Regueira.

Thanks to the positive experience TBSI has had so far with the MiR200s, they are currently evaluating the possibility of using more MiR robots for the internal transport of much bigger packages - a process they still do manually with pallet trucks and forklifts in another part of the plant. These packages are transported on pallets in large metal boxes and they are currently working with the team at RobotPlus, the MiR distributor in the area, to design an automation solution with mobile robots capable of moving the boxes according to their dimensions and weight.

“"Of course, other key factors that helped us make the decision to opt for MiR robots are their ease of configuration and use and their flexibility, features that have allowed us to adapt them to meet our automation needs, as well as the support and assistance offered by MiR,"”
Lucia Regueira Logistics Technician 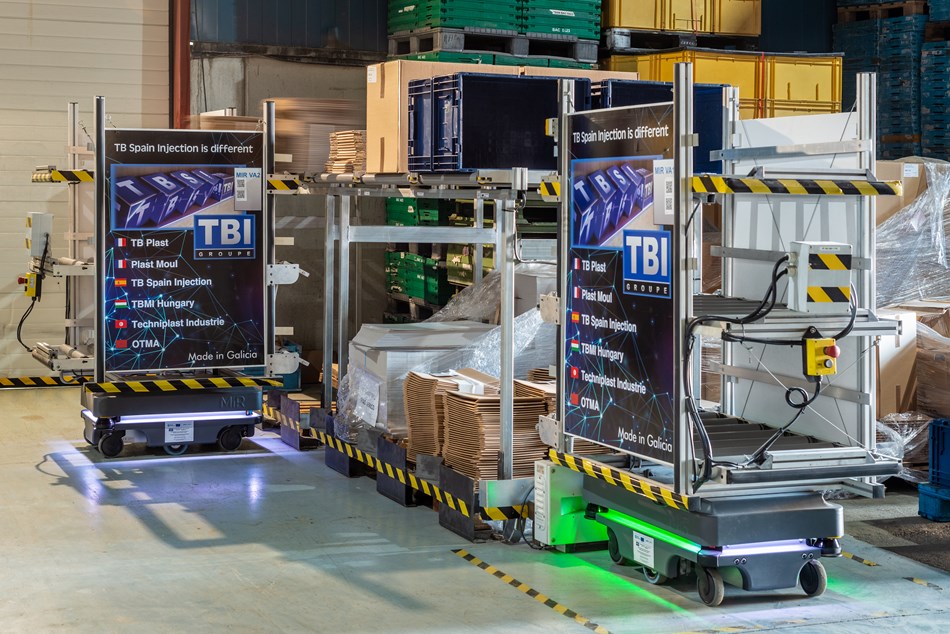 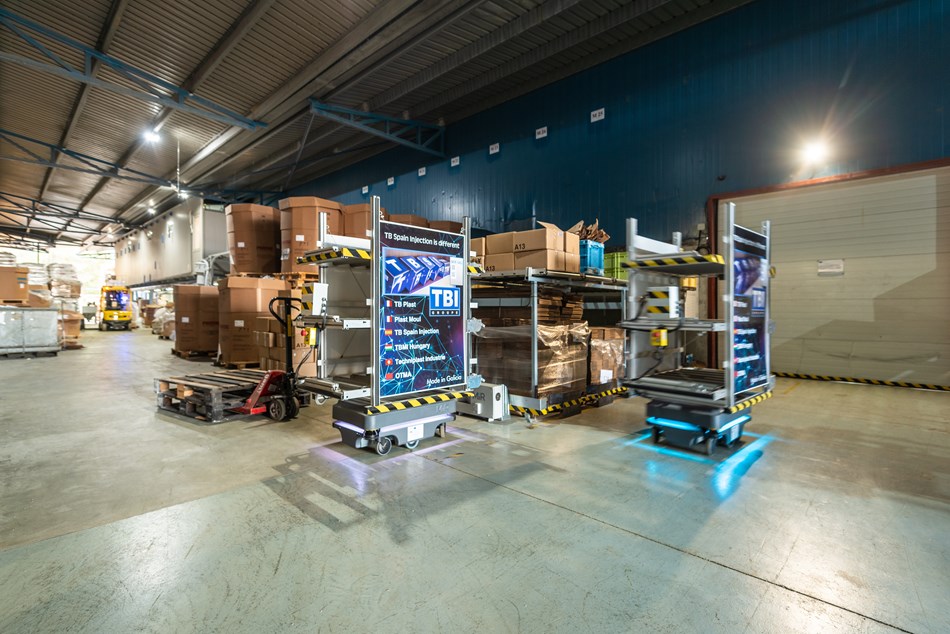 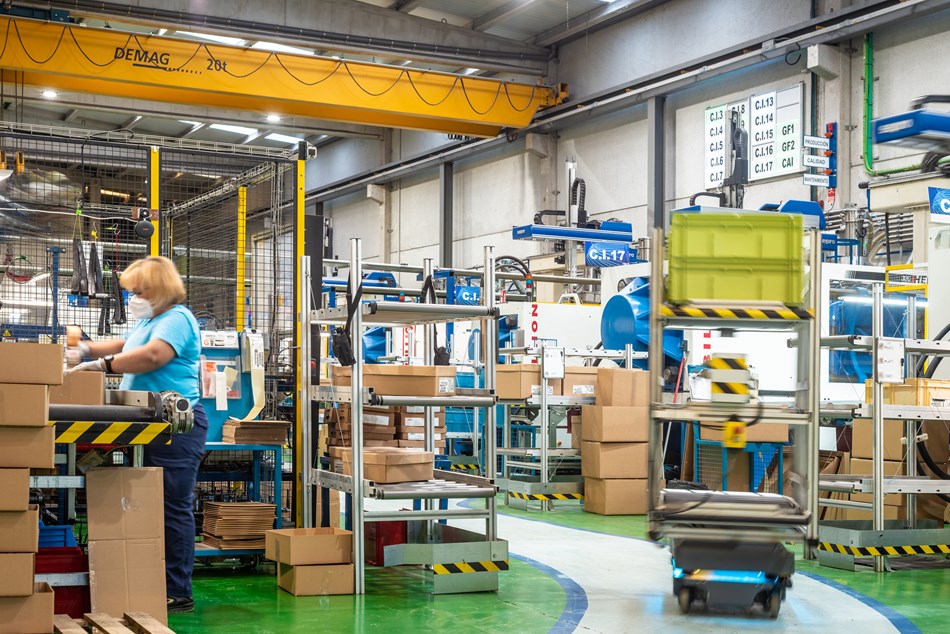 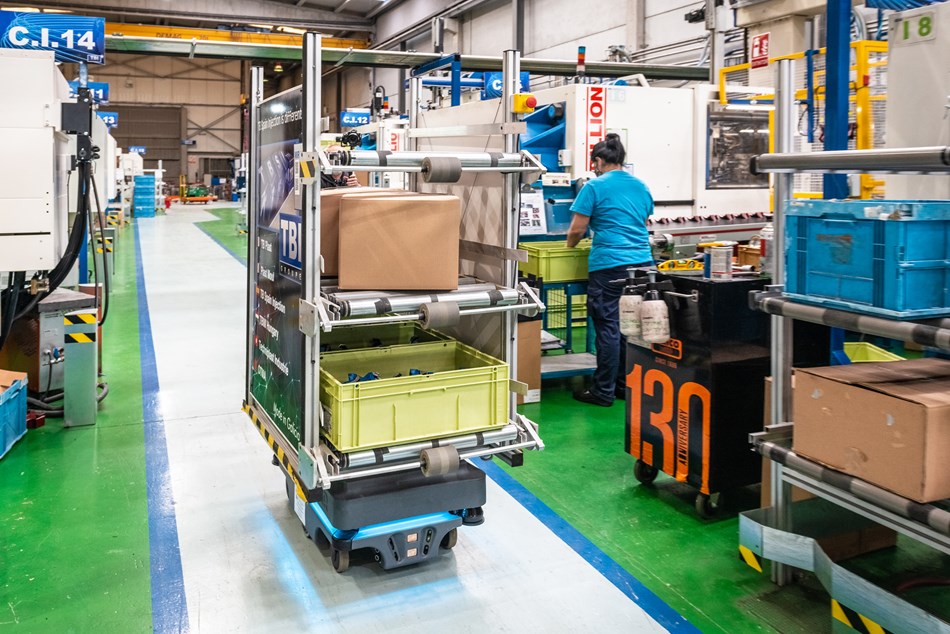 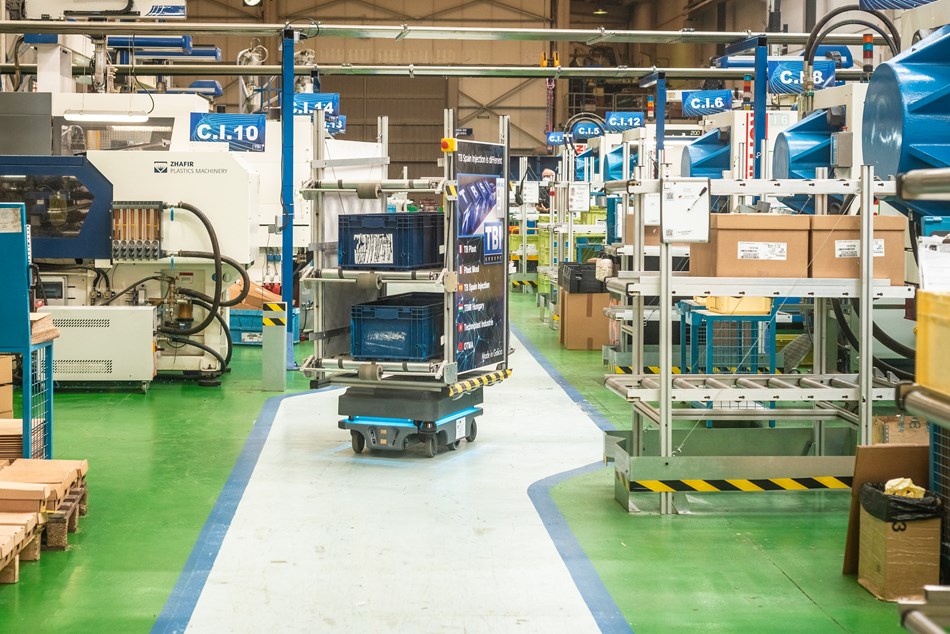