Two MiR100 robots have improved logistics and efficiency and are helping New Jersey-based manufacturer Magna-Power compete in a global market. The robots have freed the equivalent of three full-time employees from the repetitive, low-value transportation of components and assemblies so workers can focus their skills on higher-value activities.

Magna-Power is a growing, family-owned company that manufactures programmable power products for industrial and research applications around the world from its 73,000-square-foot facility in Flemington, New Jersey. With thousands of different product configurations possible, every power product is made to order. According to Adam Pitel, Magna-Power vice president of operations: “The lead-time of our products is just as important as the price itself, and we pride ourselves on having among the shortest lead-times in the industry. It’s one of the ways that we’re able to compete with overseas manufacturers.”

Magna-Power President Ira Pitel adds, “To manufacture in New Jersey is tough, and being global is even tougher. To compete, the company has vertically integrated its operations, bringing nearly all operations in-house.”

The challenge, however, was to increase efficiency in moving parts and subassemblies from the stockroom through multiple operations—from sheet metal and machining, to printed circuit board and wire harness assembly; through magnetic core and heat sink manufacturing, to final assembly and testing.

“What we found is that moving materials around the different operations of the company takes up a lot of resources,” says Adam. “People were moving materials from one department to another all day long. We thought it would be great if we could have a way to move those parts around using autonomous vehicles.”

Grant Pitel, Magna-Power’s vice president of engineering, had been looking for some time for a mobile robot similar to the Kiva Systems used exclusively by Amazon in its warehouses. When robotics distributor Applied Controls told Grant that it was now carrying collaborative, autonomous robots from Mobile Industrial Robots, Grant was immediately interested. Magna-Power implemented one MiR100 robot to manage the transportation of parts and assemblies throughout the manufacturing facility—and within weeks of its successful implementation, added a second MiR robot.

Mobile robot improves efficiency and frees up to three full-time employees before the mobile robots. Before not only were employees spending hours moving materials from one department to another, but there were additional inefficiencies as well. There was often a backlog at the stockroom window as multiple employees tried to deliver or access parts at once. And while stockroom employees did their best to kit all the material for a particular job, sometimes parts were missing or weren’t ready at the time of kitting, which required an employee to later hand-deliver one or two parts at a time. It was often challenging to manage how many people were in the stockroom building kits of parts for each sub-assembly versus being out making deliveries, or to know how long those deliveries would take. Now, employees simply load up the robot and move on to kitting the next project.

Magna-Power’s two MiR100 robots—nicknamed Scotty and Chekov—are programmed to run “bus routes” throughout the facility, from the stockroom to each manufacturing operation. Stockroom employees kit and load bins on the robots’ top module shelving, using magnetic identification labels for each department. The robot moves to each of its programmed checkpoints where employees can pause the robot to unload kits and load finished assemblies to go back to inventory. Once it returns to the stockroom, the robot automatically connects to its charging station while being reloaded so it can stay on the job all day long.

Grant has calculated that the robots free the equivalent of three full-time employees from pushing carts around the facility, allowing them to focus on the high-value jobs they were hired to do. He states, “The purpose of the robot is not to replace employees, but to make them more efficient with their time. Now they can focus on the things that we can’t get a robot to do.”

““People were moving materials from one department to another all day long. We thought it would be great if we could have a way to move those parts around using autonomous vehicles.””
Adam Pitel Magna-Power vice president of operations 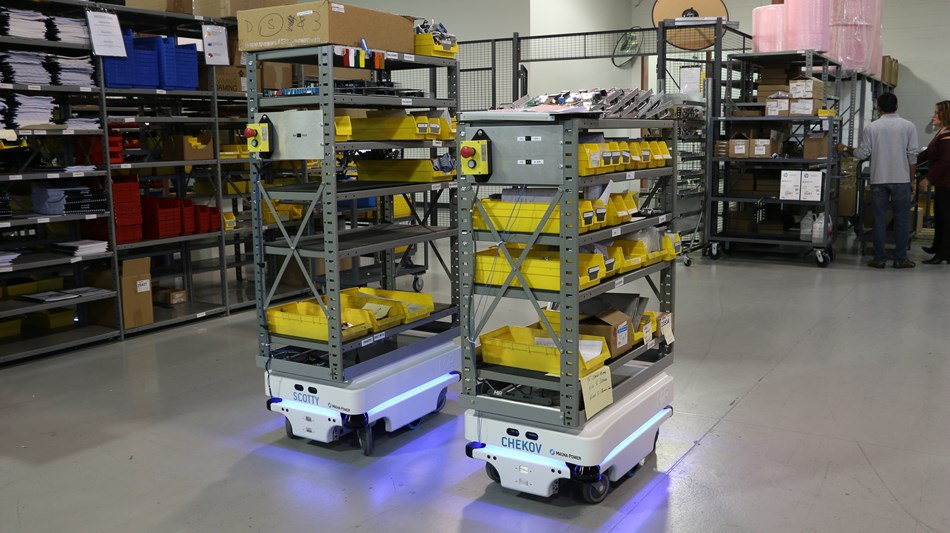 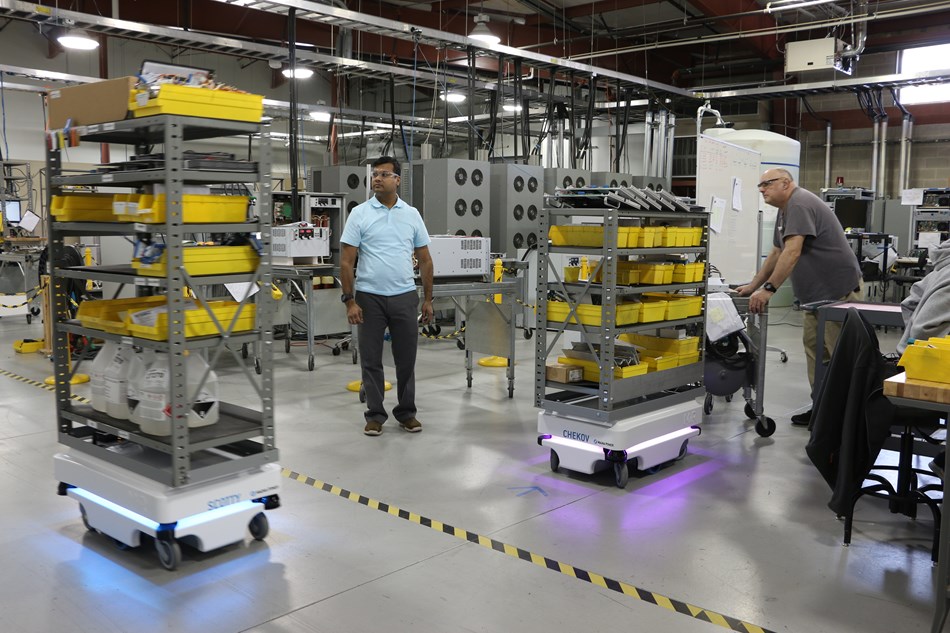 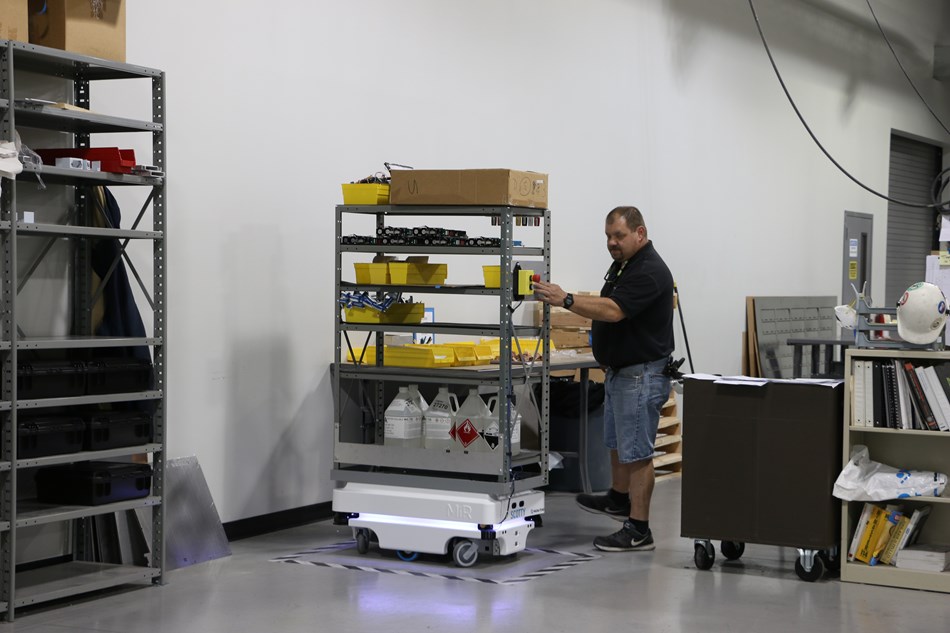 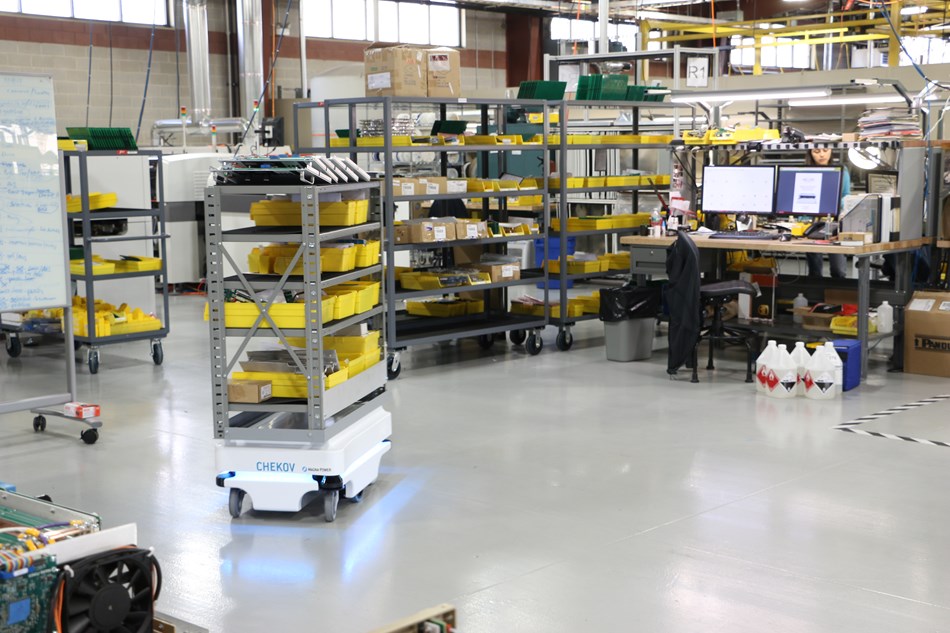 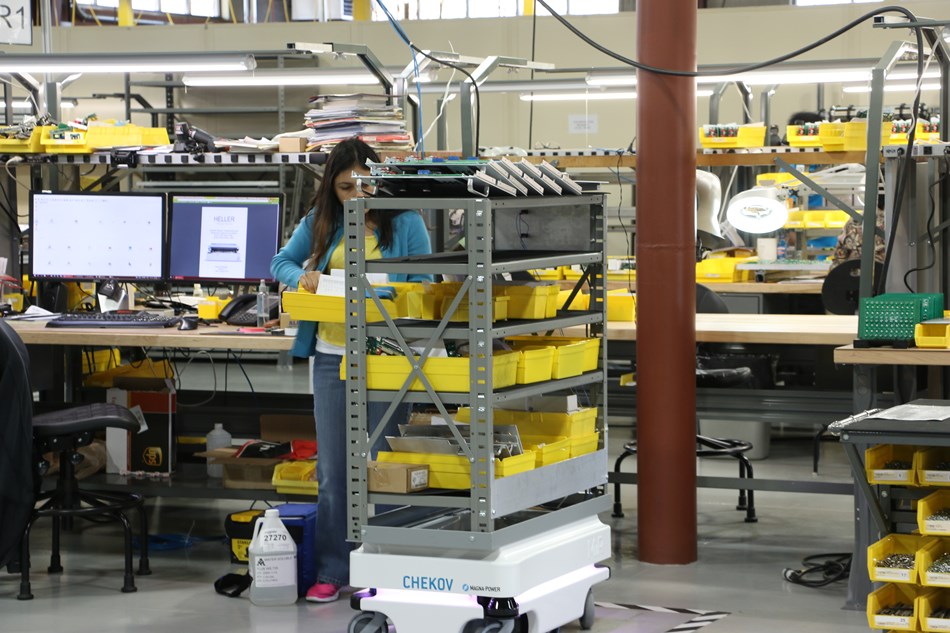