The robot bears the brunt at the nursing home

The personnel saves both time, steps and heavy lifting thanks to a mobile robot, which drives around and picks up waste from the elderly at the nursing home, Engparken, at the Ikast-Brande municipality in Denmark. The robot is also instrumental in reducing unpleasant smells from the waste as it removes it more often than would be possible manually.

A robot from Mobile Industrial Robots has automated waste collection at the Danish nursing home Engparken in central Jutland. The mobile robot, named Roberta by the personnel, has become a natural part of everyday life. It tools around with a grated cage on its ”robot back” and collects malodorous waste within the six departments at the nursing home.

The robot with the product name MiR100 has been developed by Mobile Industrial Robots in Odense, Denmark, and is gaining momentum as a mean to optimize internal transportation both in the manufacturing industry, supply chain management, and within nursing and healthcare.

03 Minutes and confidence are key

”I have arrived and will wait for 10 minutes”, says Roberta, when it arrives at a department to remove the waste. Roberta has its own established route at the nursing home, where it runs day and night. In addition, the personnel can call the robot for ad hoc tasks, as you would a cab.

When Dorthe Marinussen, who is a social and health worker, hears the robot arriving, she can have the trash bags removed from the department automatically, avoiding a long walk to an exterior dumpster. Dorthe Marinussen and her colleagues each walk up to 3 miles on an ordinary shift. Dorthe and her colleagues have welcomed the mobile robot as it has enabled them to spend the majority of their time on the inhabitants at the nursing home and not on internal transportation.

The robot saves the nursing assistants a total of 48 minutes in waste handling during a shift. Before Mir100’s arrival, six employees would have to transport the bags to a dumpster at the opposite end of the nursing home once or twice a day; a manual procedure that challenged the staff - especially during the scarcely staffed hours of the day.

”Before we got the robot, it could be problematic to leave the department when you were alone on watch and had to remove the waste. During peak hours even four minutes are worth gold to us. We have quite a few inhabitants suffering from dementia that can become distressed and create conflicts,” says Dorthe Marinussen. ”Previously it was often necessary to call a colleague to watch over the elderly, while I took the waste away. Now I can always be present because the robot picks up the waste automatically. It is easy to get used to a robot like this, in a few years we will most likely have forgotten that we had to walk to the container with the waste ourselves.”

Once the robot has collected the waste from all the departments and has driven down to the dumpster, it sends an acoustic signal received on the janitor’s smart phone app to let him know that it is time to load the bags into the container.

The MiR100 robot at Engparken has its own base in the basement of the nursing home, where it automatically drives to recharge as soon as it is not needed anymore. It takes just half an hour for the robot to reach up to 70% battery charge.

Roberta’s business case shows that it can pay for itself in 1.5 years when it is used day, evening and night. In the start-up period however, it has been decided only to use Roberta during day shifts, and thus the payback time will be around to 2.5 years. The nursing home, however, is looking into which other tasks they can use Roberta for concurrently with the waste management.

Ruth Juhl Jensen was involved with the start-up of the robot as a local manager at the nursing home, Engparken. The residents, the relatives and the personnel were relatively quick to accept Roberta.

”No one dislikes Roberta, however people had to ’size it up’ and get used to a roaming robot that talks to them and is able to take the elevator all by itself. In the start-up period, one of the dementia patients met Roberta, who said ”Watch out, here I come.” To which the dementia patient replied: ”Oh, shut up” and gave it a violent slap on the emergency switch. However, this has only happened once,” the local manager says with a smile.

A polite and respectful robot

Ruth Juhl Jensen believes that the nursing home also could use Roberta to deliver food, drugs and goods: ”We can use the robot as a good friend, who can transport things from place to place, saving the rest of us some time and a few extra steps. The more duties that it is able to help us with, the more useful it will be for us.”

The robot has been designed to be respectful and drive around people and obstacles. The personnel and residents in return, also exhibit tactfulness towards the calm, rolling helper.

”It might sound strange, but we are walking around talking to Roberta, and might say: ’Well, hello there little one,’ automatically stepping aside so the robot doesn’t have to stop,” says Dorthe Marinussen.

The residents have also welcomed the robot so wholeheartedly that they walk around and talk to Roberta during the day. The robots’ actual language usage has - in collaboration with the personnel - been carefully designed according to the target group; a commanding style could cause a dementia patient to become angry and nervous.

”It must express itself in a friendly and civilized manner. If the robot said a command such as ’Move, I need to get by,’ it could trigger a dementia patient,” says Dorthe Marinussen.

94-year old Elly List is a resident at Engparken. She is very comfortable with the fact that the hallway traffic now consists of both residents with walkers and a robot.

”I think that robots are useful for relieving people and doing the hard work for them. This robot that we got, it’s not noisy at all, and it carefully drives around me, when I arrive with my walker. It is however a little naughty and steals the elevator right from under my nose. That makes us laugh,” says Elly List and smiles to her friend, Ingrid, who is also a resident at the nursing home. Ingrid adds: ”The first time I saw the robot, I thought: ’Where is the man pushing the cart?’ But then I saw that it was a robot!”

In addition to being a permanent ’companion’ for the personnel, the MiR100 robot is also part of a larger technological testing project in preparation for a new and modern nursing facility in the municipality of Ikast-Brande in Denmark.

The actual idea for the robot at Engparken was developed when the municipality was designing the framework for a new and modern nursing home. It was the desire to incorporate the technology in the architecture, work flow and the well-being of residents and personnel. These are the words of Dorthe Iversen, District Manager in Ikast-Brande Municipality South. She is responsible for all nursing homes and homecare in the southern part of the municipality.

”In many nursing homes there is a smell of garbage inside of the housing unit, which we would like to eliminate. At first we were considering automated vacuum collection as a solution to the waste management, however that turned out to be a very expensive investment,” says Iversen. ”That is why we decided to initiate this innovative project where we are testing the technology to see which possibilities and advantages mobile robots can offer. Our goal was to find out whether it is feasible to have a transport robot at a nursing home. And yes, I believe that it is! This is why we are considering to design the new nursing home in a way that will make it easy to employ mobile robots. Also, this MiR model is equipped with a draw hook that can transport carts and cages around a building. The parameter for whether we are successful in introducing a useful technology is that the employees think in an innovative way and are motivated to see the potential of incorporating the possibilities of the robot into their work. To a great extent we are able to see that they are doing just that with the MiR robot.”

“”Before we got the robot, it could be problematic to leave the department when you were alone on watch and had to remove the waste. During peak hours even four minutes are worth gold to us. We have quite a few inhabitants suffering from dementia that can become distressed and create conflicts,””
Dorthe Iversen District Manager in Ikast-Brande Municipality South 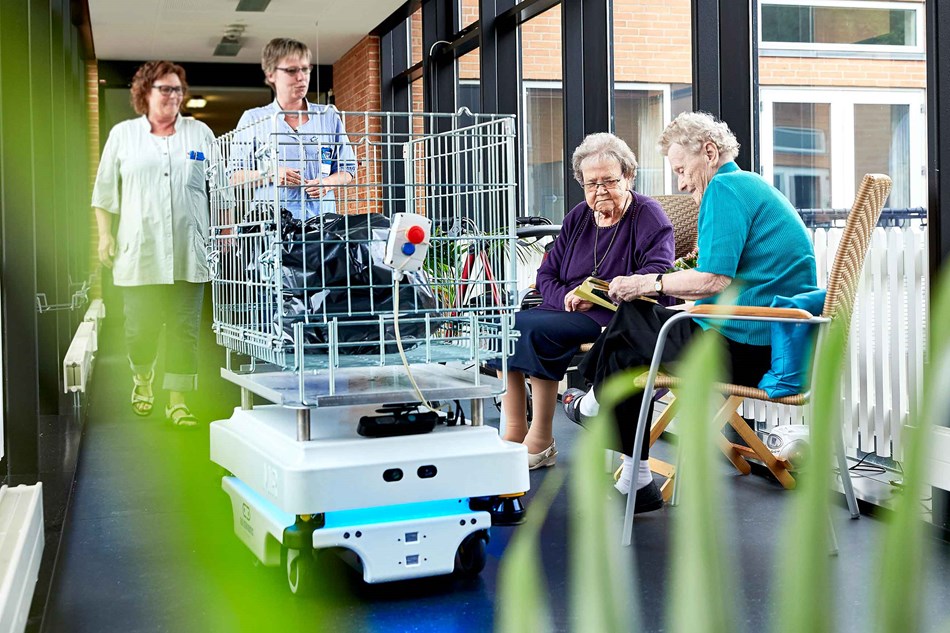 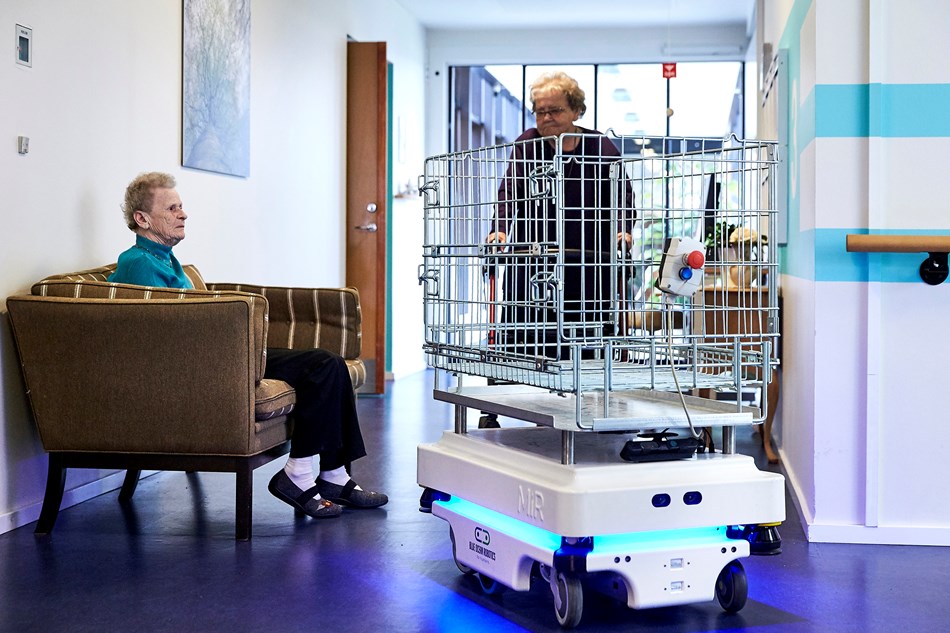