What makes MiR’s robots so safe?

Being completely safe is the main feature for collaborative and autonomous mobile robots (AMRs) that run in dynamic environments and work alongside humans. With an increasing demand for AMRs across all industries, it is important to deliver a system that does not compromise safety.

When discussing safety, it is important to distinguish between the robots’ features that enable autonomous and safe navigation in daily operation and safety functions that are incorporated into the robots to ensure that the robots always are safe, even if their primary system fails.

For daily operation the safe driving pattern of the MiR AMRs are ensured by a multi-sensor safety system that feeds data into a sophisticated planning algorithm, which lets the robot know where it drives and that decides if the robot should adjust its path or make a safe and immediate stop to avoid collisions.

All MiR robots include two laser scanners that are placed on the front and back corners of the robot to provide a 360-degree field of vision (FoV). This dual-laser approach allows the robot to be able to safely back up if it encounters an obstacle that it can’t maneuver around, or to detect people approaching from behind or from the side and stop or adjust its course if needed. As the first AMR manufacturer, MiR uses the latest and most advanced laser scanning technology, the SICK microScan 3. These ISO 13849-certified laser scanners that meet the Category 3, Performance Level d safety standard, have significantly better performance than all other laser scanners on the market. With the SICK microScan 3 the robots are immune towards sun light and dust, which usually are serious obstacles for the robots to navigate, and the precision of these laser scanners is ten times better than with other types of laser scanners.

The laser scanners are the main part of the MiR robot’s comprehensive safety and navigation system, but many other features are part of the safe and smooth daily operation of the mobile robots from MiR.

Additional navigation aid is provided by two 3D cameras mounted on the front of the robot to detect obstacles up in 1,700 mm height. With a 120° horizontal view, the robot can always see obstacles in its path. The cameras thereby detect obstacles that are under or over the safety laser scanners field of view. This allows the robots to safely maneuver around tables, for instance, which are above the laser scanner’s field of vision but shorter than the height of the robot including top module and load. Other obstacles such as wall-mounted cabinets or shelves can also be avoided. 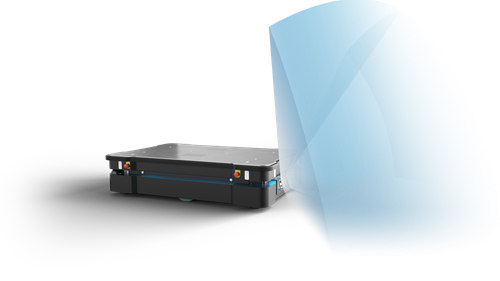 As the only AMRs on the market, the MiR500 and MiR1000 robots are also equipped with 24 proximity sensors that are placed in all corners of the robots and that are pointing towards the floor. These are detecting feet and pallets that can be below the laser scanners’ field of view. When an AMR drives, it can detect obstacles in front of it on the floor, which it will avoid thanks to its cameras, but when it goes from holding still to be moving and turning, the laser-scanners cannot detect obstacles that are placed just next to it and are below 20 cm high, such as feet and empty pallets, and hazardous situations can occur.  Here, the proximity sensors of the MiR robots are applying more safety in situations that are normally not covered by any other AMR, even though this is extremely important for heavy-duty robots that can do a lot of harm if they drive over a foot.

Additional sensory input and a software for enhanced safety

Additional sensors in the MiR robots include accelerometer and gyroscope to sense inertial force, acceleration, and rotation; and encoders on each wheel to measure speed for accurate feedback to the laser scanners to detect if the robot are slipping on e.g. wet floors.

The protective zones of the robot are dependent of the robot’s speed. This allows the robot to safely and slowly drive very close to obstacles, and it will automatically stop if a person or obstacle comes within a few centimeters.

Finally, the robot can also be easily programmed to optimize safety. On the robot’s map, forbidden zones can be marked simply via a pc, smart phone or tablet. Other instructions, such as defining preferred paths or restricting the robot’s speed in highly trafficked areas are also easily programmed. All MiR robots include a distinctive light bar on all sides that provides color cues to communicate its status to workers, and sound cues – including beeps, horns, or any desired sound can also easily be used. 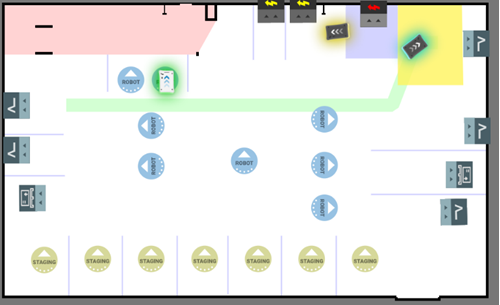 The yellow zone = zone where the robot makes sound

Autonomous mobile robots are carrying loads in environments with human colleagues without external safety measures. Some AMRs are small and are carrying small loads, but there’s an increase of heavy-duty AMRs that carry pallets or big loads of up to +1,000 kg (2,200 lbs). Especially this type of AMR can do harm if the usual safety system for some reason fails. An example of a potentially very hazardous situation could be if the motor controller short-circuits. If there are no additional safety functions, the AMR would e.g. run with full speed without the ability to stop, and this could end up doing a lot of harm. This is just one example of why AMRs must provide functional safety based on safety standards to address potential risks that are not addressed by inherently safe design measures, such as the sensory inputs.

All safety systems are designed with the basic premise that any system has a possibility of failure. According to the most applicable safety standard for AMRs, EN 1525, the safety functions of AMRs should be designed according to Performance Level d – Category 3 of EN ISO 13849, which is made to assess safety-related control systems. The required performance level is decided as part of a risk assessment, where hazardous situations are classified into five performance levels from PL “a” (low) to PL “e” (high). The higher the risk, the higher required reliability of the safety system. When a safety system is PLd, it means that the probability of dangerous failure of the system is > 10-7 to > 10-6 times per hour – equaling less than once in 20 years. The Category refers to the type of circuit architecture used to achieve a performance level. Category 3 means that it is has a multi-channel structure that can always detect single faults. 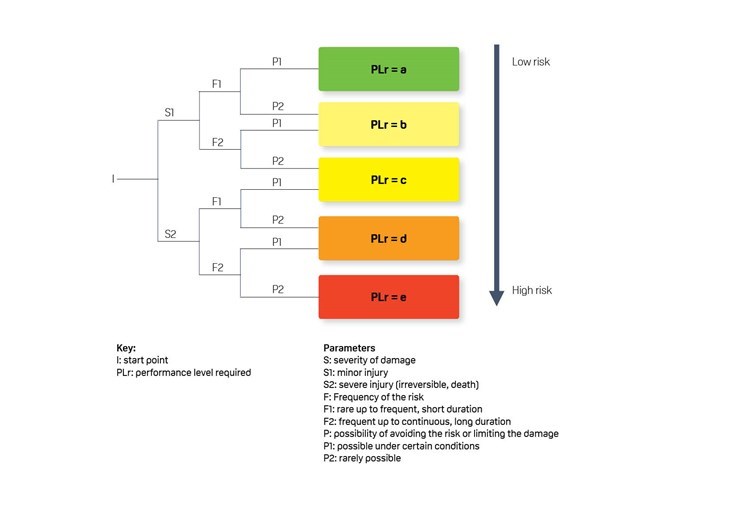 The risk graph is used to determine the required Performance Level (PLr) for the described safety function. As an AMR can do serious harm to a person if the system fails, the PLd is required for most safety functions.

The MiR robots meet EN 1525 and the American counterpart, ANSI/ITSDF standard B56.5-2012, are designed for future standards such as ISO/FDIS 3691-4, ISO/FDIS 10218, RIA 15:08, and UL 3100 as well, and have all relevant safety functions implemented to ensure that the robots react safely even if the primary safety features should fail. The safety functions of the MiR robots are documented with a Sistema report, which can be shared by MiR via our distributors. 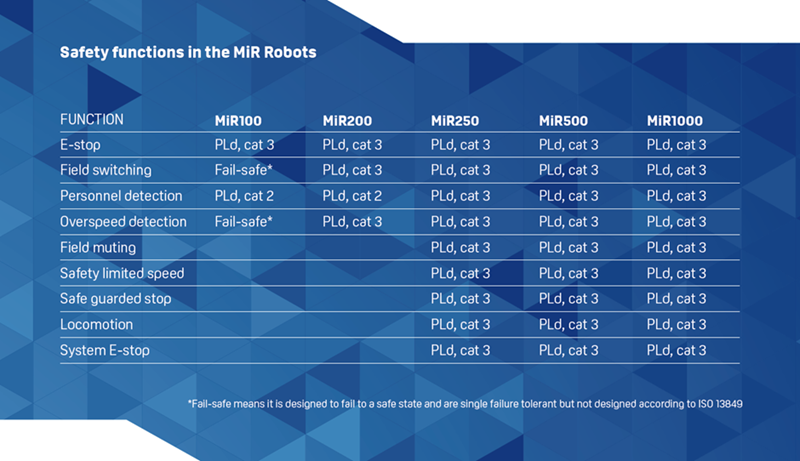 The four functions; e-stop, field switching, personnel detection and overspeed detection are mandatory for AMRs and these are incorporated into all MiR robots. These functions ensure that the robots stop in case of an error, as an emergency stop removes the power to the power drive if this failure occurs.

The five safety functions; field muting, safety limited speed, safe guarded stop, locomotion and system e-stop are connected to the hazards related to load and capacity, which is why these are incorporated into the MiR250, MiR500 and MiR1000. These functions are also used actively by the robots in daily operations. E.g. when the robots are docking into a pallet rack, the field muting is used to mute/reduce the protective field; because normally the protective zone for the heavy duty robots is quite large in order for it to remain safe around people, and this needs to be significantly smaller while driving into the racks. As soon as the robots drive out of the racks, the protective fields are re-activated. In the same way, the safe guarded stop and locomotion are used in loading and un-loading situations to ensure that the robots cannot drive while loading/unloading. When finished, these functions are deactivated, and the robot can drive again.

It is crucial that you do not compromise safety when you are investing in AMRs. AMRs need to be used in a way that always is safe because they collaborate with your employees. Therefore, when you invest in an AMR system, you must consider how the AMR is designed to act if – worse case – the safety features fail.

With the advanced multi-sensor safety systems and the functional safety incorporated into the MiR robots, these AMRs are along the safest AMRs in the market. The MiR robots do not only live up to current and future safety standards, but they are also your solution to a safe work environment where AMRs and humans work together.

If you are looking to reduce workplace injuries, the latest autonomous technology could be key.

How to calculate the business value of safety.