Determined to set high standards in an industry increasingly driven by automation, Infinitus (China) Company Ltd. (Infinitus), specializing in the R&D and manufacture of Chinese herbal supplements, identified intralogistics efficiency as a key development driver. To this end, three MiR200 robots utilizing state-of-the-art Autonomous Mobile Robot (AMR) technology were deployed at the oral liquid production workshop of the company’s Jiangmen plant. Thanks to their superior flexibility, cost efficiency, productivity, and unique appeal, MiR robots are helping Infinitus advance faster than ever on the company’s automation journey.

The Jiangmen plant in Guangdong, which first opened its doors in 2005, is one of the company’s production bases, where the MiR robots are deployed. The plant underwent a significant overhaul in 2017 and reopened in October 2018, eventually joining forces with MiR in March in 2019 to break new ground in automated production.

A fleet of robots can use logic to carry out their assigned tasks, determining optimal paths for the transfer and distribution of materials while avoiding obstacles and congestion. They are agile, safe, and reliable, making them ideal partners for production workers. Though MiR robots may resemble science fiction, they are a day-to-day reality in cutting-edge production plants.

Automation is gaining increasing momentum in China. Modern manufacturers are answering the call to drive digital transformation and achieve lean production, leveraging automation and artificial intelligence as key growth drivers. Infinitus believes that change is crucial for growth. That is why MiR’s mobile robots have become an integral part of the company’s drive towards automation.

Change can only take root in the right place, at the right time, and with the right people.

The Infinitus production plant in Jiangmen, Guangdong is spearheading the company’s rapid advances in automation. Its oral liquid production workshop is enhanced by MiR robots, making it a prime example of the industry’s most cutting-edge developments.

First launched in 2005, the plant found itself at a competitive disadvantage owing to manufacturing equipment that had seen more than ten years of use. Driven by a wave of industrial upgrades across the production landscape, Infinitus made it a priority to automate its intralogistics processes in order to eliminate production bottlenecks and wasted manpower. The turning point came when Infinitus encountered MiR autonomous mobile robots at a packaging tradeshow in Guangzhou in 2018, while reconstruction was still in full swing at the Jiangmen plant. In the words of Zhou Zhaowei, Senior Director of the Infinitus Xinhui Production Center, MiR’s solution is superior to the older Automated Guided Vehicles (AGV) technology. MiR technology is more in line with the company’s requirements for flexibility, efficiency, and unique appeal, giving Infinitus a high degree of confidence in their investment.

Describing his experience working with MiR robots, Director Zhou Chaowei said, "MiR200 robots are easy to assemble, flexible, and didn’t require the installation of additional infrastructure. They allow us to optimize human resource allocation and maintain well-balanced workflows in terms of traffic and productivity. Our workshop floors see a lot of foot traffic and frequent material transfers, so we were concerned about the safety of our personnel working alongside the MiR200 robots, as well as whether the robots could keep up with production speeds. Since they were deployed, the MiR200 robots have met our expectations in terms of flexibility and efficiency, and their unique appeal has been welcomed.”

Extraordinary levels of safety and flexibility

The Infinitus automation department originally focused on AGV technology, which has its appeal. However, it requires the installation of fixed tracks on the ground, which presents challenges in terms of deployment cost and time. In contrast, MiR’s AMR solution is quick to deploy and does not require a large budget. More importantly, it is able to logically and flexibly handle material distribution, timely replenishment, and empty truck return.

Following more than a year of construction between 2017 and 2018, the plant was officially reopened in October 2018. An oral liquid production workshop was chosen for the trial run of three MiR200 robots, which were deployed in the packaging production line in March 2019. Infinitus originally introduced the industry’s leading customized packaging, so there are 10 plus types of materials involved in the packaging process. With a carrying capacity of up to 200 kg (440 lbs), an MiR200 robot can be configured with various top-loaded accessories, as well as attachment hooks for traction. The fleet efficiently handles the transfer and replenishment of various packaging materials on the workshop floor, improving intralogistics efficiency and raising production levels.

Cost is a key consideration for companies undertaking automation upgrades. MiR’s solutions are also superior in this regard, offering self-contained and flexible options that are more cost efficient to implement than a solution like AGV, which requires additional infrastructure in the workshop environment.

Prior to the plant’s automation upgrades, the transportation of materials relied heavily on manual labor, limiting productivity. Since their launch, the MiR mobile robots have significantly reduced the need for manual labor, freeing up personnel for more advanced technical work like material inspection. The deployment of MiR robots not only phased out excess manual labor, but also streamlined human resource allocation. This allowed Infinitus to utilize talent more effectively and empowered its personnel to engage in work that creates more value.

The higher productivity levels of the upgraded plant are clear to see. The built-in sensors, cameras, and advanced control frameworks of MiR mobile robots enable them to analyze their surroundings, safely avoid obstacles, and calculate an optimal route to a given destination. This advanced technology is simple to harness through a user-friendly interface that facilitates a high degree of collaboration between man and machine. Advanced features ensure that the robots can independently and logically perform tasks safely and efficiently.

Holding the fleet together like a skilled commander is the MiR Fleet scheduling software, which is easy to program and offers centralized control over multiple mobile robots working in concert. At the Infinitus plant, MiR Fleet is used to coordinate its three MiR200 mobile robots according to the production needs of the workshop, managing task priority and designating the most suitable robot for any given task. Because the plant is a dynamic hive of activity, obstacles such as personnel, equipment, and pallets often appear in the robots’ path and may even cause congestion. This is where MiR Fleet excels, directing the robots and enabling them to safely navigate multiple paths and intersections. The software also monitors daily parameters such as power levels, issuing instructions for the robots to visit a charging station and recharge themselves when necessary. MiR Fleet software also integrates directly with the plant’s own PC-based database to manage line materials and tasks.

Bringing unique appeal to the brand

In addition to transforming intralogistics efficiency, MiR mobile robots also add brand value for Infinitus. Owing to its outstanding achievements in intelligent manufacturing and automation, the Infinitus plant in Jiangmen has become a shining example of how technology can enhance productivity, as well as an important means of brand promotion.

Standing in the corridor, you can watch the MiR200 robots freely navigate the production floor and use logic to carry out a range of duties, contributing to the plant’s automation capabilities.

Infinitus is expanding its horizons through advances in automation. As an expert in intralogistics solutions, MiR will continue to introduce innovations in AMR technology, helping companies like Infinitus break new ground in their smart manufacturing and automation journey.

“"MiR200 robots are easy to assemble, flexible, and didn’t require the installation of additional infrastructure. They allow us to optimize human resource allocation and maintain well-balanced workflows in terms of traffic and productivity."”
Zhou Zhaowei Senior Director of the Infinitus Xinhui Production Center 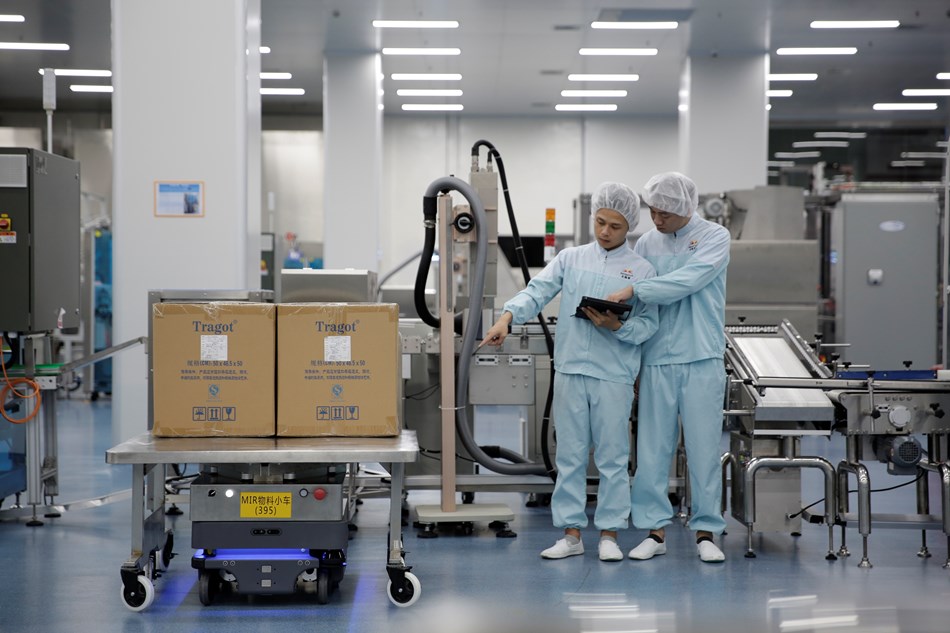 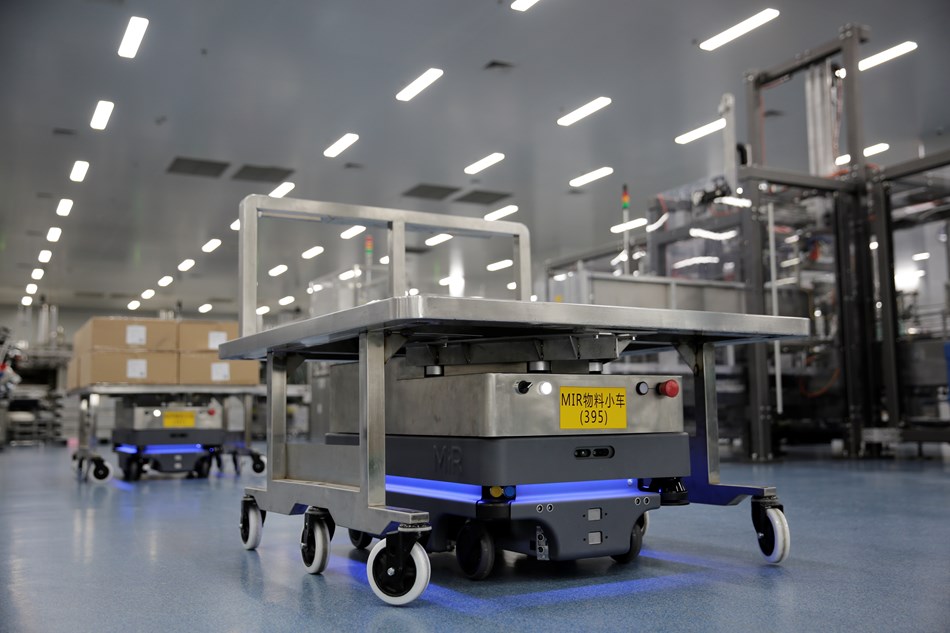 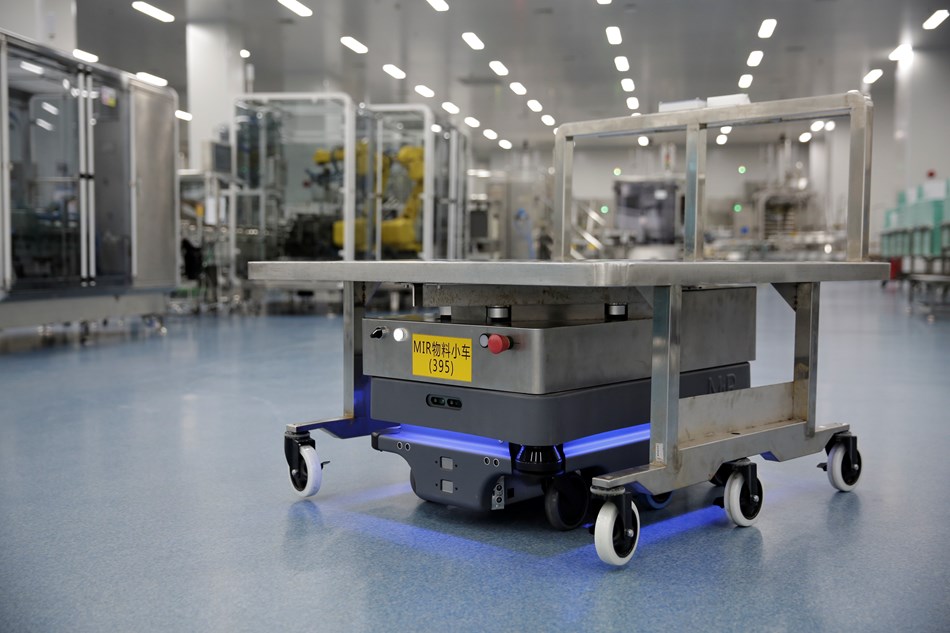 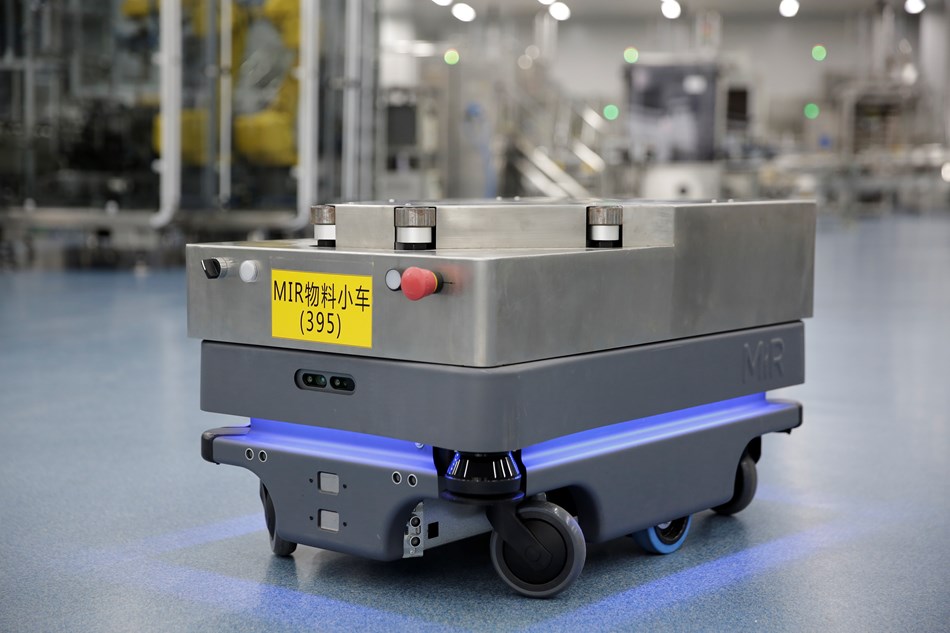