The Schneider Electric Industries Polska plant in Bukowno deals with the production of low voltage apparatus switches as well as disconnectors and accessories for these products. The company has implemented an autonomous mobile robot MiR500 that transports finished products between the production line and the warehouse, contributing to the optimization of internal logistics, reducing transport costs and improving safety.

The task faced by managers was to reduce the costs of internal transport. The plant in Bukowno employs over 300 people and has an area of 5300 m2. The process of transporting finished products from production lines to the warehouse was carried out using an old type AGV trolley with a relatively low capacity. The new solution was to improve logistics processes, optimize truck loading options, reduce the number of pallets used, and increase safety.

After reviewing offers available on the market, Schneider Electric decided on an autonomous mobile robot from MiR. The decision to choose MiR was dictated by its flexibility, work safety, lifting capacity, and ease of use. The MiR500 is a mobile robot designed to automate the transport of pallets and heavy loads with a load capacity of up to 500 kg and reaching speeds of up to 7.2 km/h. The robot was provided by the Astor company from Cracow specializing in industrial automation and robotics systems, a partner of Mobile Industrial Robots in Poland. Schneider Electric has been using the autonomous mobile robot since January 2020.

Schneider Electric Industries Bukowno estimates a fast return on investment period for the MiR500. The plant is able to reduce the costs of internal logistics and transport, as well as the number of pallets used – the ROI was calculated on this basis.

“The introduction of a mobile robot, capable of transporting two layers of products on one pallet, allows to place more goods in the truck. This helps us reduce transport costs. We are also using fewer pallets, which also reduces costs,” says Agnieszka Należnik-Jurek, Technical Department Manager, Schneider Electric.

“The old AGV line follower didn’t allow for any changes of the line, every time reconfiguration of the entire operation was required. Thanks to the flexibility of the MiR robot we can reorganize layout fast and with no additional costs, because there is no need for external support,” says Marcin Hat, Production Process Automation Engineer, Schneider Electric.

The MiR500 works around the clock in a three-shift system. The robot covers eight types of loops – the average length of each loop is 140 meters. During one shift, the robot covers an average of 5.5 – 6 km. If there is a need for any change in the robot's mission, e.g. because of minor modifications in the layout, all these changes are made by employees.

The MiR500 is equipped with a MiR Pallet Lift module for lifting, making it easier to lift entire pallets off the MiR Pallet Rack. The installed I/O sensors connected to the Wi-Fi network transmit the position of the robot on an ongoing basis. This allows constant monitoring of the route of transported pallets. In the SE Andon control system used in Bukowno, information about all orders and missions of the robot is available - this allows Schneider Electric to optimize their work. The tool constantly monitors all device parameters, such as charging time, distance travelled and percentage of charge in different periods of time.

360 degree lasers that constantly monitor the surroundings of the mobile robot, guarantee safety. Compared to the previously used AGV trolley, which could have overlooked the presence of man on its path, the MiR robot works safely in a dynamic environment – it detects people and machines, and stops or bypasses employees and obstacles. The 3D cameras and laser scanners are standard equipment of MiR robots.

Sound and light signalling also increases security. Just before entering rooms with people, the MiR500 signals its presence with a sound. After waiting the programmed amount of time, the robot enters the room. The MiR500 is also equipped with a blue spot – a mandatory blue light for moving machines at Schneider Electric.

““The introduction of the MiR robot was well received by our engineers. MiR500 currently transports pallets with goods up to 400 kg, working three shifts, 24 hours a day. The advantages are particularly noticeable by warehouse workers, who think that MiR robot is very simple and has a user-friendly web interface. They also appreciate the amount of space that was recovered after removing carts used by AGV,””
Marcin Hat Production Process Automation Engineer, Schneider Electric 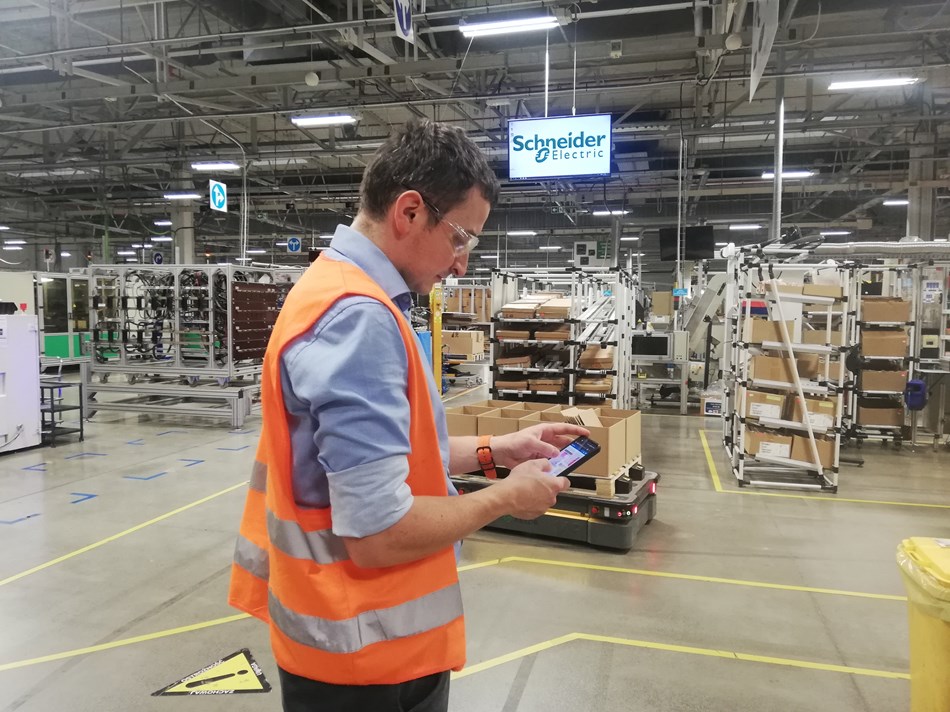 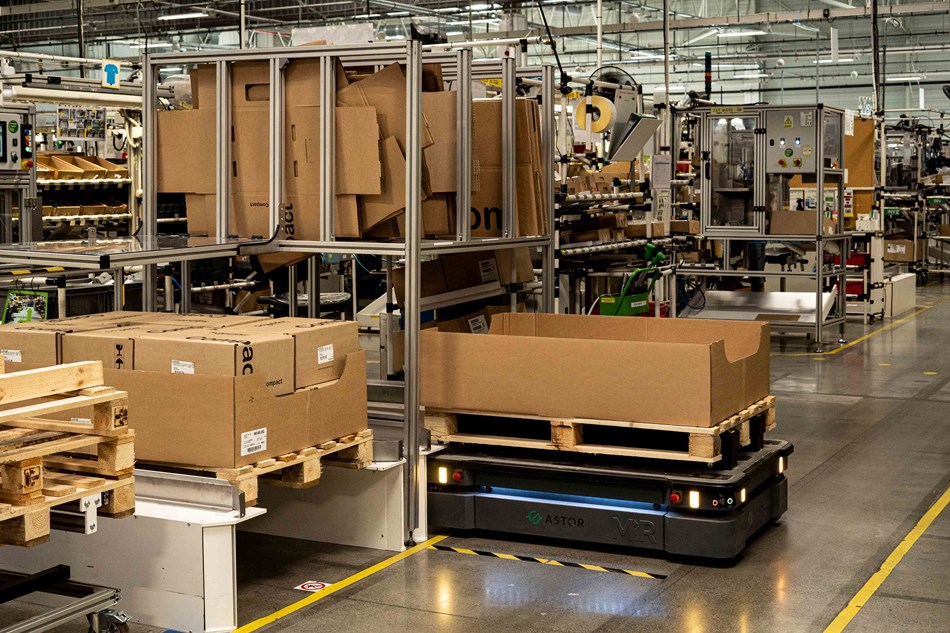 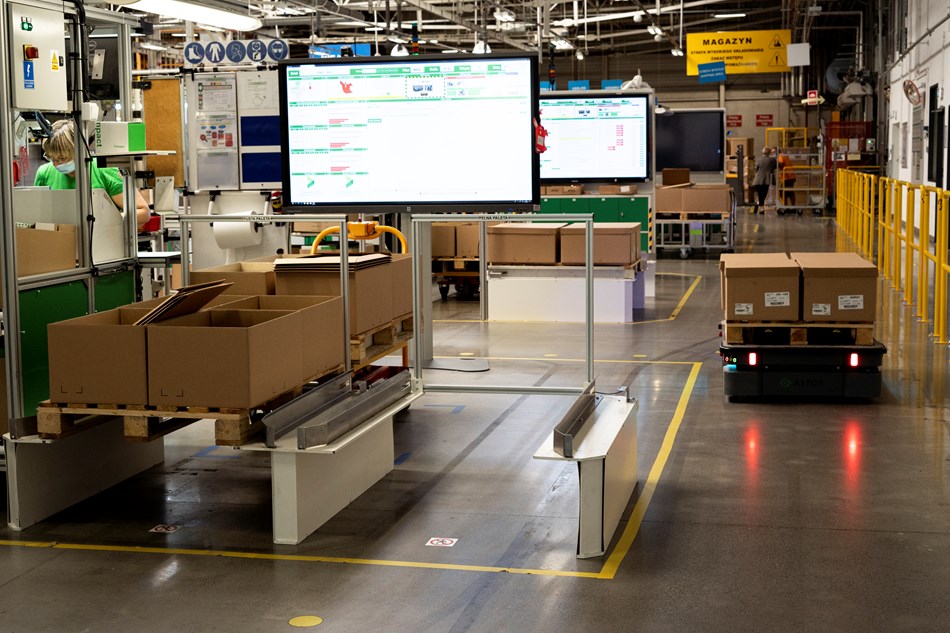 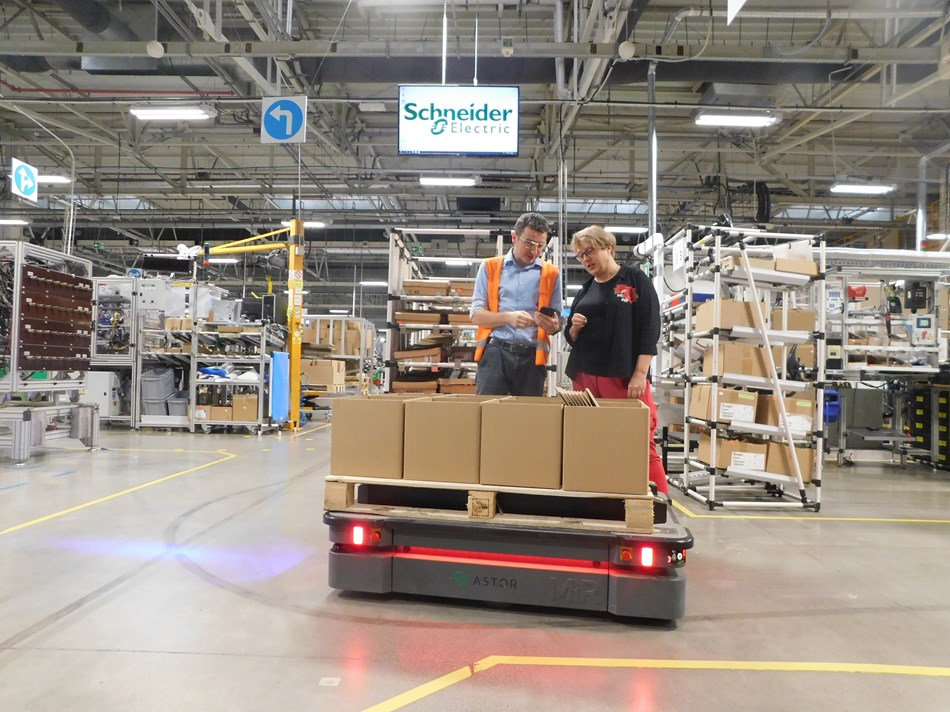 Schneider Electric is a leader in digital transformation in energy management and automation. It offers digital solutions and combines the world's best energy technologies, real-time automation, software and services into integrated solutions for homes, buildings, data centers, infrastructure and industry. It develops intelligent and integrated solutions and technologies for managing energy and processes in a safe, reliable, efficient and sustainable manner. There are 5 production plants in Poland in the following locations: Bukowno, Mikołów, Szczecinek, Świebodzice and Tychy. The Schneider Electric Industries Polska plant in Bukowno deals with the production of low voltage apparatus switches as well as disconnectors and accessories for these products. 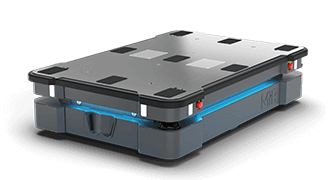 Designed to comply with the highest available robot standards