The plant in Esztergom operates as a Tier2 supplier to global automotive supply chains such as Volkswagen or Mercedes. The internal material handling system of the factory, which produces tens of millions of finished products a day, is supported by a fleet of six MiR200 autonomous mobile robots (AMRs). These AMRs have accelerated logistics processes, resulting in increased productivity, with user-friendly MiR Fleet software enabling easy and efficient management of the entire fleet of robots.

To replace the plant’s outdated material handling system, TE Connectivity began to assess the opportunities available on the market. The company needed a flexible system that would be simple to alter and extend, yet easy to operate because of the plant’s narrow traffic routes, frequent changes in internal layout and tasks, and the continuous movement of raw materials, finished products, and people.

Fleet of robots in two types of tasks

”When we started to search for a solution, the AGV market was booming and AMR systems were not yet known,” Miszler said. ”AGVs need fixed infrastructure like magnetic tapes on the floor or wire beneath the surface therefore in a dynamic environment they are not the best choice. The autonomous operation makes AMRs far more flexible which is crucial for modern manufacturing environments. Once we discovered MiR, the next step was to find a local distributor. VFP Systems Ltd. proved to be a very reliable partner throughout the whole process. At the start of the project they helped to define our then vaguely outlined ideas and to find the ideal robotic solution.”

The Esztergom plant purchased a fleet of six MiR200s to primary perform two types of tasks. Five of the AMRs supply raw materials and finished products between the warehouse and the given value streams. TE Connectivity also uses ROEQ cart 300E equipment that works seamlessly with the MiR robots.

The sixth MiR200 works in a fully automated setup with a special, custom-made module attached. An automatic packaging station next to the injection molding machine counts the finished products and calls the robot automatically when the storage compartment is full. As part of the mission, the MiR200 picks up an empty bin, replaces it with a full one, and then transports and stores it in the warehouse. After an employee sets up and launches the robots directly using the MiR Fleet software, there is no need for human intervention at any point. This process is a prototype of an automated high-bay warehouse system tested under production conditions.

The main advantage of AMS is their extreme flexibility, as they can be equipped with various top modules depending on the desired task. TE Connectivity uses top modules with compartments, shelves and conveyor belts, but has also experimented with towing hooks. Ongoing testing will identify other applications for AMRs.

“The project initially began as a simple investment in intralogistics, but over time, it has transformed into a broader pilot program,” said Gábor Schvamberger, logistic analyst at TE Connectivity. ”Our goal is to find the most efficient technological solution that can be implemented in other locations within our global group of companies as well. To this end, we work closely with MiR and the Hungarian distributor to test new robotics solutions that are still under development. For example, a system using artificial intelligence-based software and webcams to help navigate robots is being tested under operating conditions. We use several types of robots at the same time, and with AI technology, MiR robots are able to detect if another non-AMR-type robot is in the area to avoid possible collisions.”

Another key advantage of AMRs is that MiR robots did not require any modifications in the production area after the loading/unloading areas and the charging stations were installed.

The warehouse workers who use the MiR200s each day have received basic training to learn how to launch missions and operate the robots. Currently two employees from each shift have been trained, with plans to implement more advanced programming training such as mapping and task assignment. ”Honest communication and persistence helped the employees accept working alongside the robots. Once they started to use the robots, they realized the value the technology brings to the facility,” said Gábor Miszler.

MiR Fleet software facilitates the management of the robotic fleet as well as the training of the staff. Once the basic setup and programming tasks are complete, employees can easily master how to deploy the AMRs each day through a user-friendly interface. The software simultaneously manages and prioritizes missions, coordinates the movement of the robots working in a given area, and monitors charging levels.

Esztergom is not the only TE Connectivity site using MiR robots. Through a global collaboration, a local team oversees and evaluates automation projects running in separate locations, including the Hungarian factory.

“The greatest advantage of the MiR robots is that they are capable of navigating without special markings on the floor or the installation of guidance hardware, making them easy to re-program according to the quickly changing dynamic environments of our 100+ sites,” said Roberto Lu, VP technology at TE Connectivity. ”Esztergom is one of the most important sites for the AMR program. The staff there has done an excellent job.”

Investing in the future

The robots work seamlessly, are simple to program and relieve the workers from tiresome tasks. As a result, the speed of internal logistics processes has significantly accelerated. “It’s no secret that with MiR robots, we have invested in the future and made a very good decision,” Miszler added. ”Our achievements definitely encourage us to expand with automation. Our new production hall, which is currently under construction, has been designed with a layout already optimized for robots. We wish to expand the automated injection molding technology and further automate material handling and warehousing by deploying the robots in more and more applications.” 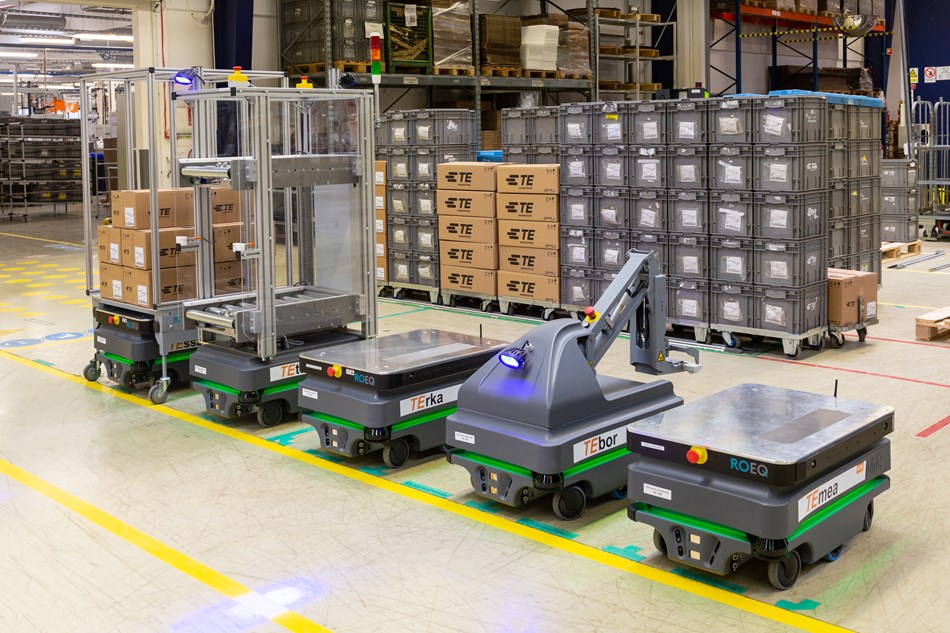 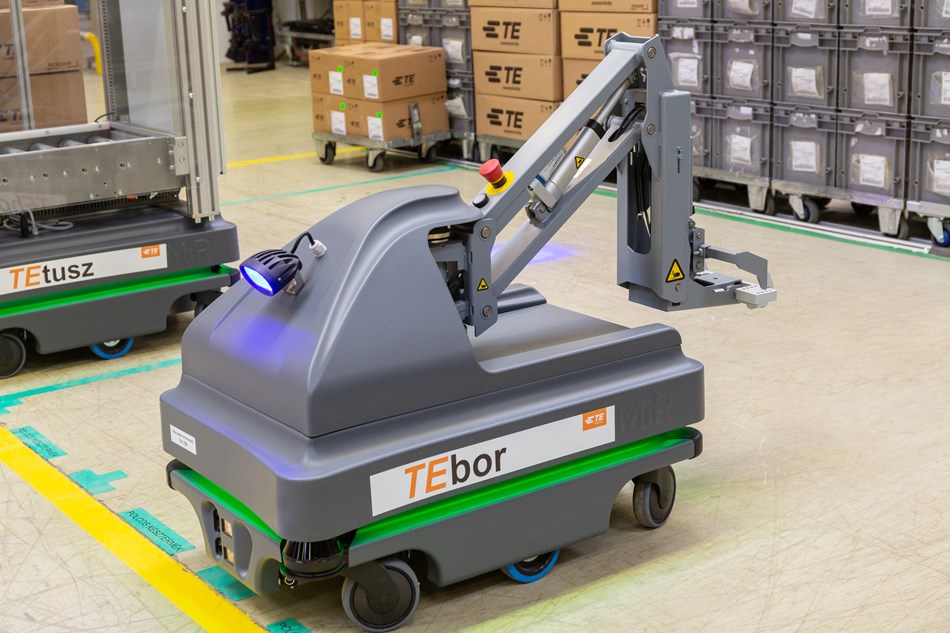 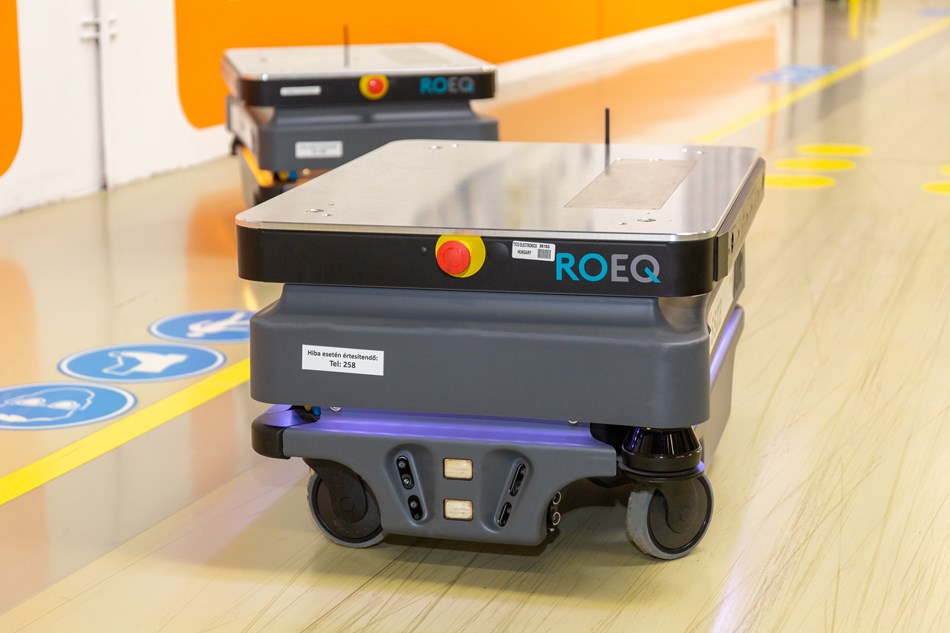 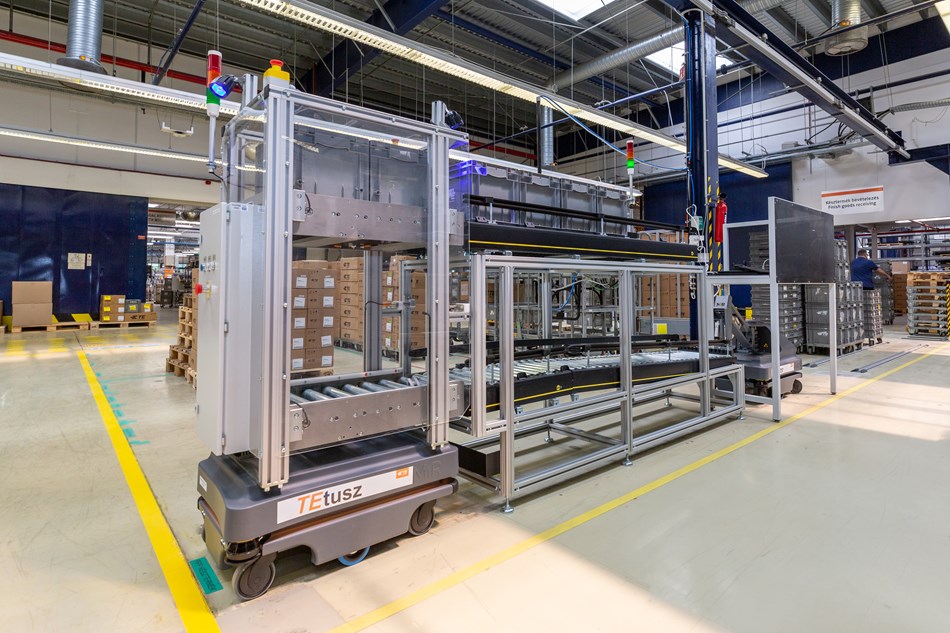 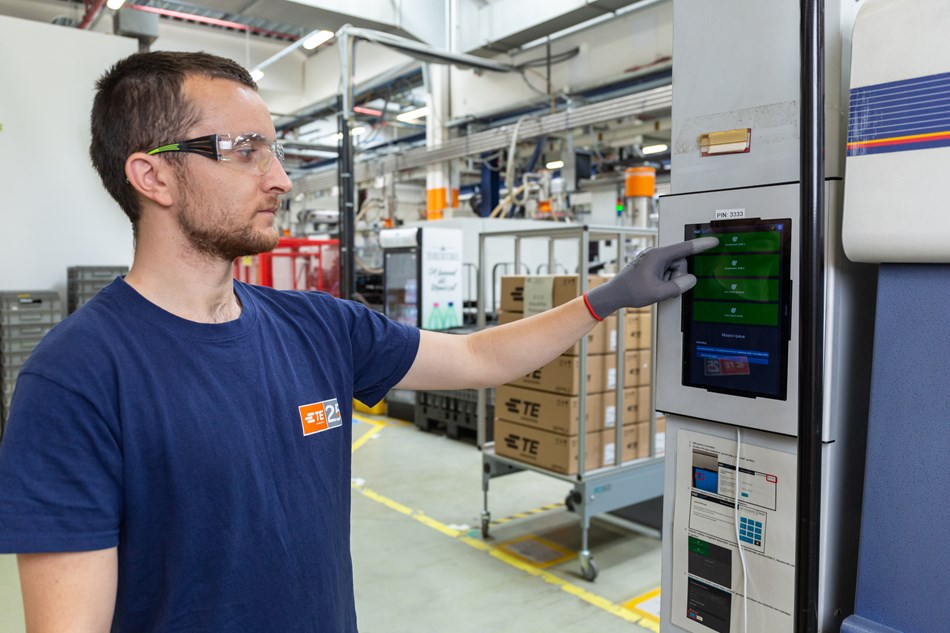